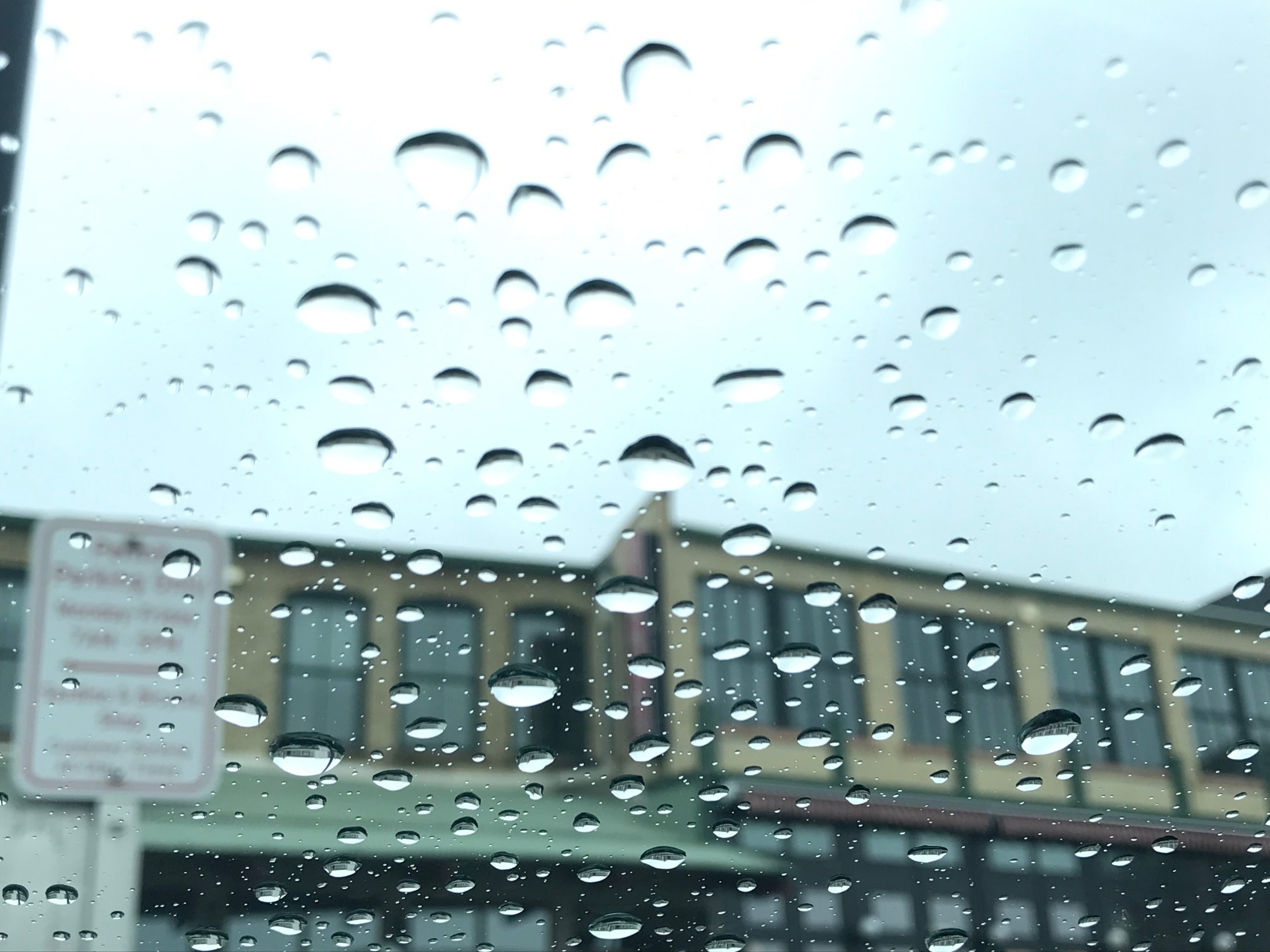 (Written Spring 2017 for a publication that, well, never informed me as to whether they published or not.)

I have paid $200 in order to stand in freezing rain for over three hours, painfully hungover, with my bladder about to burst for the entire time. It was literally the worst few hours of my life. I honestly can’t wait to do it again, decisions always further tweaking.

Bags packed and jean jackets rocked, for all intents the event has merely become Dark Lord Weekend for us. With a hotel established early on in Hammond, and 18th Street Brewing down the lane, all is well. No need to worry about slogging back to the Munster industrial parking lot to considering napping before driving back to Chicago. No more sampling combinations of ride hitches, cabbies, or cruising shuttle buss trollies from Beer Temple.

Dark Lord Day 2016 included at ticket price-hike from $30 to $200. It sounds like some sort of version of beer gentrification, but it was actually comforting in the scheme of things. For one, the $200 price tag included four bottles of Dark Lord, arguably one of the harder bottles in the world to obtain, one bottle of Barrel Aged Dark Lord, typically a $50 dollar bottle. You got to choose from about twelve variants. The price also included money for food tickets.

After the initial sticker shock and a quick run through of the math, we found that we typically spend that much or more during the event on any given year. The reason for the hike was DLD 2015, which was a virtual monsoon. We guessed that based on the fact that it rains every damn year, this would help Nick Floyd to not lose all the sales to people just waiting in line for their bottles and then leaving as soon as possible. The main reason that we enjoyed the idea of the price, whether intentional or not, was that it helped to maintain the culture surrounding the phenomenon.

It is what it is. 3 Floyds is humungous now and there is no going back to the simple days. But at least by jacking up the ticket price roughly 600% it specifically kept away novices. To a certain extent it kept away a lot of people who would normally go to the event in order to buy bottles and flip them the next day on Craigslist.

He knew he wouldn’t lose ticket sales; they would merely go directly to fans, within that 4-minute window they are actually on sale. If profit is a flipper’s main motive, the full event along with the increased cost made it less worth the effort for them to attend. The new price and format meant, on average, the Dark Lord Day attendee would by default, be a true cult member – someone who is intentional about standing in line with a patchwork of friends, vaguely familiar faces, and strangers. Roamers from near and abroad, bringing only their best whale bombers or 750 milliliter game-changers to share with whomever is within a five foot radius and wielding a glass snifter. Nomads prepared to taste, discuss and appreciate the most rare, perhaps the most hyped, but no question – the most sought after beers in the global craft market.

I should mention the guy with his homebrew is also standing there.

The traditional line-ups of dead soldiers along the industrial park curb lines are the mesmerizing conglomerate works of art, a Stonehenge cobbled together by frozen-rain tattered bunch of drunken litterbugs. The Dark Lord Day rows of empties have come to be a staple by no later than 10 AM. As we walk by these bottle sidewalk shrines we hear whispers of awe. Beer geeks point out vessels they have claimed to have tried at some point. Some empty bottles are snatched up and shoved in a backpack to be put on display at home. Look, sometimes people collect garbage to display as trophies.

I pop the red wax on my Murda’d Out Stout for those lucky enough to be in my vicinity.

To foray briefly in to what that was, I will note below:

The Baller Stout was a Russian Imperial Stout released by 3 Floyds for their 15th anniversary party in 2011. It was a blend of four incredibly rare stouts (at the time) from the States and abroad: Dark Lord, De Struise Black Albert, Surly Darkness, and Mikkeller Beer Geek Brunch. The Murda’d Out Stout was the bourbon barrel aged version of that. It was a $50 bottle at the time and God only knows what they go for online currently.

Now mind you, all of this happens before one even makes it into the event itself.

We passed the point of no return as far as potential urinary relief. Upon entering into the human cattle corral maze for the next few hours, that idea of passing on that final port-o-potty became an instant regret for me. As that nasty blue cube became smaller and smaller in my peripheral, my bladder became larger and larger, filled to the max. It hurt. And the idea of shoving by hundreds of people in the backward direction didn’t seem likely, let alone even physically possible.

If I had been wearing a poncho at the time I would have covertly peed into an empty bottle. I swear to God if I could do it again I would have surely just let loose right in my jeans. Nobody would have been the wiser due to the fact we were all drenched from the rain in the first place. It wouldn’t have mattered if anyone knew anyway because I still would have written about it here in great detail.

My friend Josiah told me my skin looked green. He gave me a Cliff Bar. It did not help with the fact that my kidney was about to be ruptured by the fifteen beers I had been filling my body with since before breakfast that morning. We probably waited a good hour to get through the aluminum bar labyrinth into mud-caked haven.

Psychologically, my body was prepared to piss as soon as we walked in. But it wasn’t to be. There was still another thirty-minute wait to get into wall of port-o-potties. I didn’t care. I ran right in between two of them, opened my umbrella in some feeble attempt to shield somebody’s eyes, and let it flow freely out on a chain link fence. Vacuum siphoning Niagara Falls through a Twizzler, it was the single best feeling I’ve ever witnessed, beginning to offset the worst day of my life. I didn’t care if I got arrested for public urination. At that point it was a medical issue for me. After that, it was on to wait in yet another line – to obtain our bottles.

The point of all this, for me, is the culture. The artwork design on the labels, the atmosphere of the tiny brewpubs and taprooms, camaraderie and the high level of awe in which we hold the awkward rock stars who run everything. True geekdom and its many tapestries in the form of comics, horror, and heavy metal.

I get a lot out of meeting people at craft beer-centric bars like Rock Island Public House in Blue Island, or Maria’s Packaged Goods in Bridgeport, and hearing their stories about rare finds and beeracles they’ve witnessed. I enjoy bars with no television sets. Those places lend themselves well to conversation with strangers and craft beer bartenders – who generally know everything. Discussing distaste for beer flippers who buy bottles and create arbitrage by selling them for a huge markup to some guy who lives out of state and didn’t have access to the sale. Indulging in our self-righteous stories of how we tried to boycott Goose Island after the sale to InBev, only to come right back around to a humbling cave-in, five days later, after tasting a sample of the last Proprietor’s at FOBAB.

Hearing tales of how these new friends scored the final bottle of 2012 Bourbon County Cherry Rye after waking up at 4 AM on Black Friday to stand in line outside of some no-name grocery store in some no-name town. Sharing about the time we had to stick hand warmers in our shoes while on wait for Half Acre Big Hugs because it was 10 damn degrees outside. 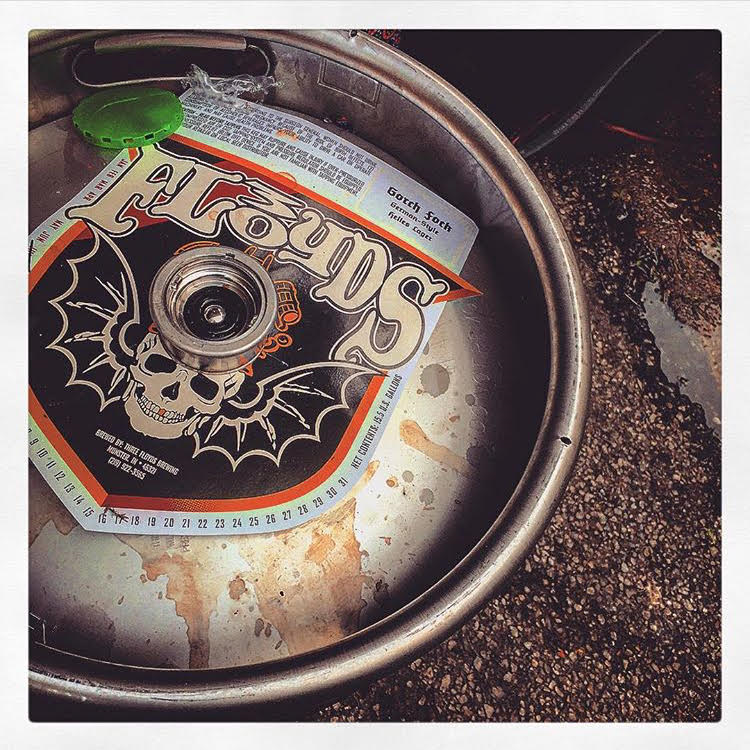 A beeracle happened at Dark Lord Day 2012. As I sit and write this – five years ago this very night. It was an event to be depicted on copper panels in the Church of the Undercrown, and told over campfire light to the youngest of souls for generations to come.

My friends and I were standing around cracking wise, sipping the bourbon barrel aged Dark Lord variant that we adorably chipped in four-ways to purchase, and also opened on spot. A man walked by and his 2012 Bourbon Barrel Aged Dark Lord Muerte variant slipped his innocent grip and careened to the gray parking lot. Minutes before that, he had not only won the right to pay for that bottle via Golden Ticket scratch-off, but he also shelled out $50 for it. But it didn’t shatter. No – in a merciful act by the angels above, the top merely popped off.

Instead of bringing it home to age for four years, he had no other choice but to drink it on the spot. And he had no other option but to share it with the four lucky bastards who were standing right next to him, who witnessed the calamity, expressed outright shock, and apparently didn’t mind the risk of ingesting glass bottle particulates. The Muerte, aged on ancho chili peppers, opened a whole new world for us. Changing the rules of supply and demand and clearing our vision as to what would be in store for our crew as a whole, that beer recipe single handedly altered the course. 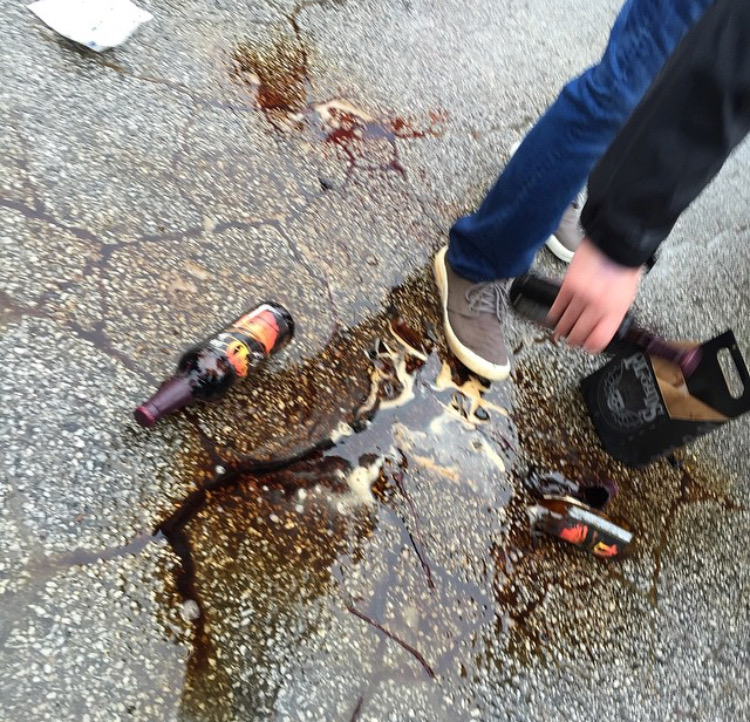 Now look. I’ve never seen a top pop off a bottle like that when being dropped – and I’ve seen a lot of poor drunk schmucks drop their bottles on the ground to inevitably shatter. I don’t know that it’s actually physically possible, even though we witnessed it happen. I don’t think the instance could be recreated in a laboratory even under the most ideal conditions. What happened that day was supernatural.

Five years later, I’m still dreaming about that spicy demonic brew, that saint who randomly changed our lives by sharing it with us, and the modern day beer miracle that transpired. Remember: beeracles can happen right before your berry Wiess.

One thought on “Beeracles Can Happen.”